Does the Catholic Church Forbid Cremation? 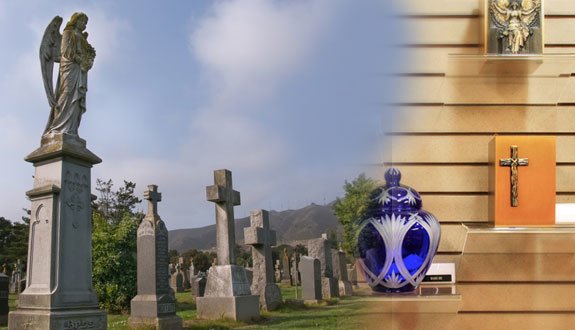 Every religion has its own funeral traditions and preferred burial methods. Catholics are no different. Many traditions surround a Catholic death that include when to hold the funeral, administering the last rites and the Rite of Committal. While the generalities are the same, the degree to which a person follows these traditions depends on the depth of orthodoxy of the person who has passed. In most cases, these traditions have been held for hundreds of years. However, as the world advances, some traditions change to make a modern Catholic funeral a possibility.

The History of Cremation and Catholicism

Throughout most of history, cremation was prohibited in the Catholic faith. Many Catholics believe that death is the passing from the physical world into the afterlife, and when Christ returns, bodies of the deceased will be resurrected. In this sense, many Catholics believe in preserving the body through a traditional full-body burial.

Taken directly from the bible verse in Genesis, “Dust thou art, and unto dust thou shalt return.” Many Catholics take this as instruction on full-body burial and entombment practices. Hundreds of years ago, the Pagan act of cremation was a sign of the denial of Christ’s resurrection, which meant that a Catholic cremation was essentially a final act of doubt in Christ’s resurrection.

Ashes were also not allowed at the funeral mass since the Church places extreme importance on the body that received Baptism, Confirmation and, if applicable, the Sacrament of the Sick. In 1997, the Church lifted this ban and allowed urns to be displayed during funeral mass as they acknowledged the importance of giving grieving loved ones something tangible during the service.

Cremation and the Catholic Church Today

As technology advances, and new burial technology develops, many Catholics are choosing to be cremated. It’s estimated that almost one-third of Catholics opt for cremation in today’s world, and that number is steadily growing. The reasons for choosing cremation over a traditional full-body burial are different for everyone. Some Catholics choose to be cremated in order to save money on funeral costs, save space in the family burial plot or to have a lesser environmental impact.

Regardless of the reasoning behind choosing cremation, it’s now one of the most popular choices for Catholic families. While the Catholic Church is not overly enthusiastic about the idea, they do recognize cremation as a viable option for a Catholic burial.

The Catholic Church continues to recognize healthy changes within the religion. There are still a few stipulations in place to protect hundreds of years of tradition. For instance, a Catholic may now be cremated, but the remains must still be buried in a Catholic cemetery or entombed in a columbarium. Ashes of the deceased must be treated with extreme reverence the same way a full-body burial should be treated to preserve the sanctity of the funeral process.

If you would like to learn more about Catholic burials and cremation, speak with one of our knowledgeable and compassionate experts at O’Shea Funeral Home in East Meadow, NY. Call 516-826-1010 today.